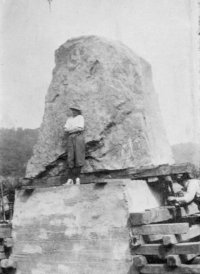 Ida Horner standing in front of the boulder she found for the DAR Monument, 1913

Edwin L. Drake traveled to Titusville, Pennsylvania in 1857 as an agent of the Seneca Oil Company of Connecticut.  His mission was to find and produce crude oil in quantities that would make it commercially successful for refining into kerosene.  With the help of salt well driller and blacksmith William (Uncle Billy) Smith, Drake adapted and used salt well technology to drill for oil.  On August 27, 1859, the Drake Well struck oil at 69½ feet, giving birth to an industry that has forever shaped our modern world.  Drake Well Museum and Park preserves and interprets the site of the Drake Well, educating the public about the oil and natural gas industries in Pennsylvania, their founding, development and growth into global enterprises.

The Daughters of the American Revolution, Canadohta Chapter, were among the first to mobilize to preserve the site of Drake’s accomplishments and memorialize the oil well that launched a global industry.  They acquired the well site and one acre of surrounding land through a donation from Susan A. Emery, widow of one of the petroleum industry’s early pioneers, and hired Ida Horner, owner of the granite and marble works in Titusville, to erect a natural sandstone monument.   The DAR memorial was dedicated on August 27, 1914, safeguarding the Drake Well site as a public history space for future generations.

Edwin C. Bell built and operated the first museum dedicated to the history of the Drake Well and Pennsylvania’s oil industry.  Still standing as a private residence in West Titusville, the museum displayed a collection of oil industry memorabilia from 1913 until Bell’s death in 1923.  In anticipation of the Drake Well’s 75th anniversary, local oil producers began raising funds to build the first museum and library located at the well site.  Spearheaded by the American Petroleum Institute, they constructed a dike and two buildings, acquired of 219 acres of adjacent land and landscaped the site.  Upon the new museum’s completion in 1934, the Drake collection from Bell’s museum was installed, a curator hired and its operation turned over to the Commonwealth of Pennsylvania. 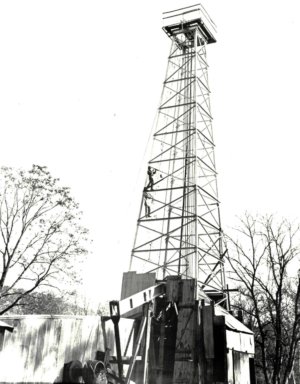 The Drake Well was granted National Historic Landmark status in 1935, and in the 1940s, the Commonwealth began planning an expansion of the museum’s facilities.  A full-size board-for-board replica of Drake’s second engine house and derrick was constructed and other outdoor exhibits were added in 1945.  By the 1959 Centennial of Oil celebration, one wing a new museum and library was complete with the remainder of the building being completed in 1964.  Eighty professionally designed permanent exhibits were installed in the museum building over the next decade.

The museum continued to grow during the latter half of the twentieth and beginning of the twenty-first centuries.  Operating historic oil field machinery, including the standard drilling rig and the Central Power oil lease display, were added to the grounds during the 1970s and 1980s.  Additionally, a 2,048 square foot transportation building was completed in 1997 with an exhibit entitled “Moving Oil!” installed during the winter of 2000-2001.

In 1994, the Commonwealth designated Drake Well Museum as the “crown jewel” of its Oil Heritage Region, which earned Federal designation as the Oil Region National Heritage Area in 2004.  The museum celebrated the 150th anniversary of the Drake Well and began an $8.75 million Commonwealth Capital Project in 2009.  Renovation to the museum’s main exhibit building, the addition of a geothermal energy system, expansion and improvement of the museum’s collections storage area and the design and installation of a new 10,000 square foot, state-of-the-art petroleum exhibit were completed in August 2012.